In this article I will briefly tell you where to go after your first visit to the port of Atlantis.

So the quest from Camp Icarus led us to Atlantis (more details). Which places to visit in the port I explained here (click). And now to get further into the quests we are interested in the NPC Trail Guide.

From whom we get a quest to visit three points: 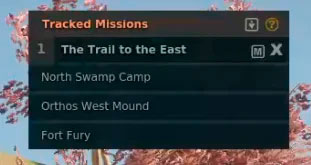 At each of the points we will be available additional quests, most of which can be completed immediately. All points can be visited using a ground vehicle, but approaching Fort Fury there is a great risk that your vehicle will be destroyed. This is not a problem as it can always be repaired using [Vehicle RK-0 (L)].

If you don’t have such a repairer, then don’t despair, just put your broken car right on Fort Fury or Camp Icarus and someone will fix it for sure 😉

So, gradually advancing we still get to the fort, where this quest ends.But now the NPC we gave the quest to has 3 new ones available. I’ll talk about that in future posts.

Fort Fury itself attracts players not only by the abundance of high-level mobs surrounding it, but also by one location that players call “the pit” [Calypso, 67544, 78297, 312, Waypoint]. I’ll talk about that in future posts.

The Fort itself attracts players not only by the abundance of high-level mobs surrounding it, but also by one location that players call “the pit” [Calypso, 67544, 78297, 312, Waypoint]. High-level mobs periodically appear here, which can only be defeated with a large team. Very often global loot falls here, so there are always people here.

Which you can exchange for daily tokens at the rate of 50 [Blakkshaah Badge] for 4 tokens. The exchange is made at Fort Fury by NPC Sergeant Gutterez.